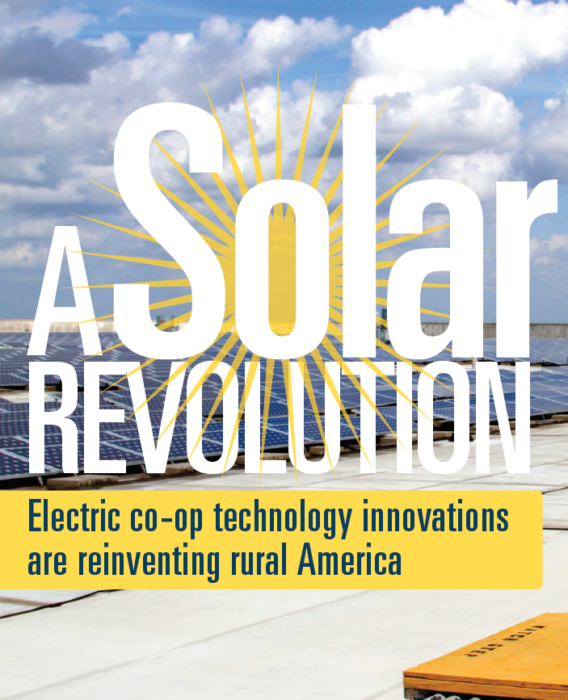 Technology innovation and deployment are essential to rural America. In agriculture, manufacturing and commerce, it raises productivity and enhances the competitiveness of rural businesses. Technology innovation and deployment also helps ensure an affordable and reliable electricity supply to support the rural economy. From large centralized electric generating stations to community solar arrays and battery storage, many electric cooperatives are providing the technology investments and operational expertise to power rural America and, in turn, create economic benefits locally and throughout the economy.

Meeting the evolving needs of consumers

In the mid-to-late 1930s, the electric cooperative movement gained traction as members of rural communities formed more than 500 electric co-ops. They served sparsely populated areas that were deemed unprofitable to reach by other utilities. In these early years, co-op members often took it upon themselves to perform the challenging tasks of setting poles, running lines and connecting neighbors to the grid. Their efforts paved the way for deployment of lighting for work and study after dark, electric pumps to provide running water, and washing machines that “made washday almost fun.”1

More than 450 electric distribution co-ops include solar energy in their supply mix, either directly or in partnership with their generation and transmission co-op. Electric cooperatives lead the utility sector in community solar, with more than 200 distribution co-ops offering consumer members access to solar energy through a community solar program.

Initially, rural electrification involved purchasing electric generating supplies from facilities owned by the federal government or neighboring utilities. However, as new electric cooperatives were formed and electricity demand growth soared, new electric generating supply was difficult to secure. New supplies from federal facilities were limited and neighboring utilities often would not commit to selling electric power to meet the growing electricity requirements of electric cooperatives. While some coops had small generators to meet their emergency needs, these were inefficient and expensive to operate. The solution lay in larger, state-of-the-art steam-powered electric generating plants, which achieved low operating costs through improved economies of scale. But these plants were costly, and their electric output far exceeded the requirements of any single distribution co-op.

Cooperatives innovatively responded to this challenge by extending the electric cooperative model upstream to electric generation. Electric distribution cooperatives across the rural landscape collectively banded together to create “federated” electric generation and transmission co-ops (G&Ts). These new organizations supplied wholesale power to their distribution co-op members, with boards of directors made up of representatives from each of these members.3 This scaling-up allowed the G&Ts and their members to plan and finance state-of-the-art power plants and also facilitated power purchase negotiations.

This business model where geographically dispersed electric distribution co-ops received power largely from centralized generating plants created new challenges. Electricity line losses are substantial when transmitting electricity over long distances at low voltages, making long distance transmission impractical. The solution was the deployment of high voltage electric transmission. G&Ts constructed electric transmission and interconnected these systems with those owned by other utilities and federal agencies across broad geographic spans. They also interconnected with neighboring power companies and entered into pooling arrangements that improved the reliability of their own operations while similarly benefiting metropolitan areas of the country.4

Today, 62 G&T cooperatives provide wholesale power to distribution co-ops by generating electricity at their own facilities or by purchasing power on behalf of their distribution members. Collectively, G&Ts have made substantial investments in more than 65,000 megawatts of electric generating capacity, generating about 5 percent of the nation’s electricity across nearly 71,000 miles of transmission lines.

A solar revolution in rural America

Twentieth century technology motivated investments in large-scale centralized generating stations and high voltage transmission to meet the increasing electricity needs of rural America. However, today electricity demand growth is increasingly being met through investments in renewable generating resources often sited within the low-voltage distribution grid. Many of America’s electric cooperatives are expanding the nation’s solar power footprint, motivated by a desire to enhance member satisfaction by meeting increased demand for solar offerings and made possible by a decline in the cost of installed solar.

In 2013, as part of the U.S. Department of Energy (DOE)’s SunShot Initiative, the National Rural Electric Cooperative Association (NRECA) launched the Solar Utility Network Deployment Acceleration (SUNDA) project in collaboration with electric co-ops and other partners to demonstrate the potential for solar in rural America.5 The project was structured as a knowledge accelerator for co-ops, utilizing an iterative and learning-by-doing process to develop photovoltaic (PV) engineering designs, streamlined business models, and effective financing and tax structures. The experiences of 17 electric coops in the SUNDA program provided guidance to make solar projects more prudent and accelerate development across the cooperative network. Today, more than 450 electric distribution co-ops provide solar offerings to their members, either directly or in partnership with their G&T.

An important innovation from the SUNDA project was the development of community solar programs, which offer all interested consumer-members an option to participate in solar energy, including renters and low- and moderate-income consumers who might not otherwise have access. The community solar model aligns well with the co-op business model. It allows individual households to purchase or lease solar panels or to purchase a share of the output of a solar photovoltaic project. Larger projects benefit from economies of scale in construction and co-ops can size and price their programs to fit member demand. Today, cooperatives lead the utility sector in the penetration of community solar with more than 200 distribution co-ops across more than 30 states offering a community solar program directly or in cooperation with their G&T.

The economic impact of investment in technology innovation and deployment

Energy technology innovation and deployment is capital intensive and the electric industry is regarded as the most capital-intensive U.S. industry.6 Electric co-ops have deployed substantial capital in meeting the electricity requirements of rural America. In 2017, net utility plant across both distribution and G&T cooperatives totaled more than $133 billion, an average of $6,650 per consumer-member.7

The financial management associated with these investments — combined with ensuring safe, affordable and reliable electric operations — pose important fiduciary responsibilities for a cooperative’s leadership. More than 7,000 members from local communities serve on their electric cooperative boards. Director education and training programs, experience and stability on the board, and appropriate director compensation are critical to assuring the dependable operations that have allowed electric co-ops to become central to the social fabric of the communities they serve.

Technology innovation and deployment also requires a capable and technically skilled workforce. Electric co-ops fulfill their mission through the direct employment of more than 68,000 people. The job classification with the largest number of co-op employees is electric lineworkers. These jobs involve extensive safety training and project-management skills. Lineworker wages average about $35 per hour plus health and retirement benefits. Moreover, co-ops directly support the employment of more than 97,000 contractors who provide various services including vegetation management and construction services.8

Direct co-op jobs, spending and investments create positive economic effects, which ripple throughout the economy as materials are purchased from suppliers and as employees of co-ops and their suppliers spend their income.9 NRECA and the National Rural Utilities Cooperative Finance Corporation recently commissioned a study of the economic value of electric cooperatives across their communities, regions and the country. Considering the full range of effects, America’s electric cooperatives annually contribute $88 billion in value added gross domestic product (GDP) across the U.S. economy; $40 billion in labor income; $22 billion in federal, state and local tax revenues; and support an average of nearly 612,000 U.S. jobs each year.10

Bringing the Benefits of Solar to Low-Income Households*

Low-income households typically spend a disproportionate share of their monthly income on energy; many also lack the ability to invest in energy efficiency improvements and renewable energy systems. In May 2018, Cherryland Electric Cooperative—serving 35,000 members across six northwest Michigan counties—began participating in a low-income solar pilot program that seeks to reduce the energy costs for these households by combining weatherization and clean energy initiatives. “Filling an unmet need for a segment of our membership that deserves the same treatment as any other member is one more step towards ‘walking’ our leadership ‘talk,’” says Cherryland General Manger Tony Anderson.

The program is designed to educate, influence and ultimately enable low-income households to actively manage and control their energy budgets. Under this innovative program, 50 low-income households receive the benefit of electricity from nine solar panels from the Spartan Solar Array, a community solar project that is a partnership between Cherryland’s G&T, Wolverine Power Cooperative, and its distribution member cooperatives. Cherryland applies a 10¢ credit for each kilowatt-hour produced by the panels—the same amount offered to all community solar participants. Typical annual bill credits are expected to be around $350 per household over the 15-year enrollment period.

Weatherization is another important facet of the program. To be considered for the solar benefit, households must have had weatherization measures installed or an energy audit performed indicating that no additional measures would be cost effective. Typical energy savings from weatherization range from 15 to 40 percent and are essential to enable households to gain more control over their energy spending. Overall expected savings from the solar credits are expected to increase total savings to participating households by as much as 70 percent.

Upfront program costs were $270,000. The Michigan Agency for Energy (MAE) provided $80,000, with Cherryland funding the remaining $190,000. These funds were used to acquire the 15-year community solar panel leases for the program participants. The pilot is being delivered jointly by the cooperative and the Northwest Michigan Community Action Agency (NMCAA). NMCAA provides the weatherization programs and manages income qualification, while solar participation and program tracking are managed by Cherryland. Lost revenues to Cherryland are projected at $17,500 annually, but this will be partially offset by Cherryland’s reduced electricity purchases from its wholesale supplier.

*This case study is an excerpt of Eric P. Cody, “Bringing the Benefits of Solar to Low-Income Households: The Case of Cherryland Electric Cooperative, NRECA, June 2019.

Power in Purpose: Building the Next Economy

Building the Next Economy

A Path to Shared Prosperity

Insights from ESOPs reveal the potential of employee ownership

Cooperatives and the Sustainable Development Goals

Elevate your cooperative identity with a .coop domain