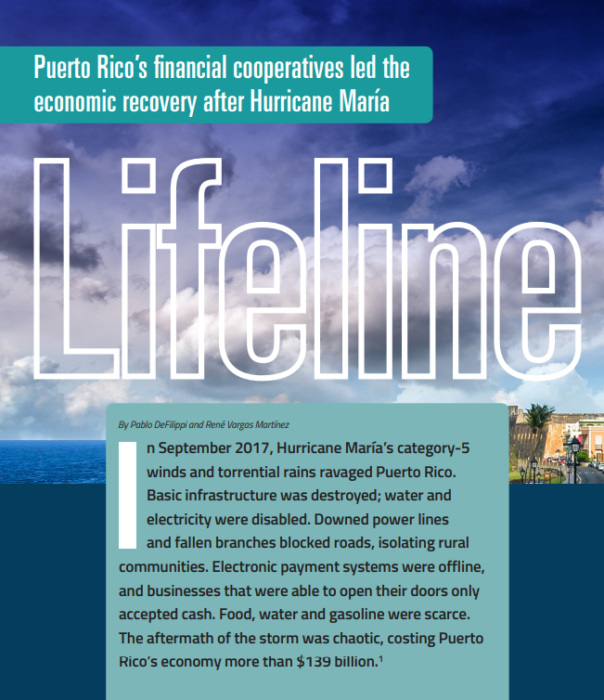 In the days that followed, Puerto Rico’s financial cooperatives immediately responded, becoming critical to the survival of the island’s underserved communities in a time of crisis. Now — stronger than ever — these cooperatives are poised to transform the island’s economy.

Puerto Rico’s cooperative movement has existed for more than a century, but the cooperative way of life can be traced back to the Taíno Indians, who organized collectively to fulfill their basic needs. It wasn’t until the 19th century that the cooperative principles took hold in Puerto Rico. The first cooperative on the island was established in 1873, when it was still a Spanish territory. The “Los Amigos del Bien Público” used collective savings to help members during difficult times, such as health crises or deaths in the family. The cooperative also offered financial education and other services to its members.

The cooperative business model enjoyed support from prominent institutional and political figures in Puerto Rico who actively promoted the movement and even helped establish cooperatives across the island. These men and women were the most important political figures of the era, and are still remembered today. The Catholic Church, too, played a pivotal role in promoting the cooperative philosophy early on, helping create more than 35 cooperatives across the island.

Financial cooperatives in Puerto Rico are very similar to credit unions in the U.S. They were organized with the same mission: To serve people who have been excluded from the financial mainstream and offer quality community-owned financial services. Members of financial cooperatives are called socios and, just like credit unions on the mainland, they are member-owners. Yet there is a distinct difference between the two models.

In a credit union, members deposit their money in regular shares. By doing so, they are owners of one share of the credit union, and can run or vote for their respective board. Members of financial cooperatives also deposit money in regular shares, but in order to maintain their membership, they must also make monthly deposits to a restricted share account. These shares are separate from regular shares deposits, and are called acciones. This contribution is considered restricted capital, and if the financial cooperative is profitable, the members get a percentage of their shares. Members can also apply for low interest loans based on their restricted share balance, and part of the interest they pay goes to this account. They can withdraw their shares if they decide to end their membership in the cooperative, or if they have a financial emergency.

Financial cooperatives during and after Hurricane María

Financial cooperatives’ response to Hurricane María was multi-pronged. Telecommunications systems were down, representing a challenge to financial cooperatives whose members depended on direct deposit and ACH transfers to access desperately-needed funds. To ensure that these electronic deposits were processed, local financial cooperatives each sent a representative—in many cases, their CEO—to the National Cooperative Bank in San Juan, where ACH transfers are cleared, with a thumb drive to exchange the ACH files. This strategy was critical during the first three weeks after the storm, when most communications systems were down.

Puerto Rico’s cooperative movement has demonstrated incredible resilience and capacity to grow in the face of adversity. It has survived hurricanes, the bond crisis, austerity measures and population loss. Financial cooperatives have more than 1 million member-owners across the island, and they are fiercely loyal. They participate in the financial cooperatives’ governance, attend annual assemblies en masse, and have actual ownership stakes in these financial institutions. Financial cooperatives also contribute to the growth and development of co-ops across all sectors.

Financial cooperatives in Puerto Rico pride themselves in their service. Members feel at home in their cooperative. They know the staff by name, and feel like a member of the family. Since the storm, however, resiliency has become one of the cooperative movement’s biggest characteristics. The movement has overcome the 2006 Puerto Rico Financial Crisis, the 2008 global financial crisis, the Puerto Rico bond default, the 2015 bankruptcy and a category-5 hurricane. “Cooperatives are at their best during financial crises, because their purpose is to help people in need, when things are tough,” Ramírez said. Cooperatives in Puerto Rico have remained true to that mission. They have focused on their communities and the members they serve, and have proved that they can survive and thrive even under the worst conditions.

Financial cooperatives have distanced themselves from the practices of local banks, making sure that people see the cooperative difference not only in name, but also in substance. This is perhaps one of the most important lessons for the credit union movement. At the end of the day, we need to be able to show, in a tangible way, that we are different from banks, and that our priority is the well-being of our members—not just those who are affluent, but also those living in vulnerable communities who have been marginalized by mainstream financial institutions.

Another challenge was the overnight conversion of Puerto Rico’s economy to a cash economy. Due to the collapse of the communications networks, there was suddenly a very high demand for cash. To adequately explain how financial cooperatives reacted to this challenge, we interviewed José Julián Ramírez, executive director at the Asociación de Ejecutivos de Cooperativas de Puerto Rico, an organization that represents the island’s financial cooperative CEOs. Even though there was enough cash, there was no way to get the money where it was needed, Ramírez told us. Even armored vehicles couldn’t get through the roads to make deliveries.

To manage this situation, financial cooperatives decided to ration the amount of cash available to withdraw per member. They also established partnerships with closed local businesses, convincing them to open accounts and deposit their excess cash. CEOs also undertook regular runs through impassable roads to San Juan, bringing cash that would continue to serve their communities.

In the aftermath of Hurricane María, financial cooperatives were up and running just 48 hours after the storm, many serving as the sole financial institution for their municipality.

True to their values, financial cooperatives opened their doors to everyone in the aftermath of the hurricane, demonstrating solidarity with the entire community. Financial cooperatives cashed checks for people they knew in the community, whether or not they had existing accounts. They even cashed checks from other institutions that were closed, including banks, so that people could buy food and gasoline. “This was risky, but we believed that in that hour of need, our mission was to serve our communities and help them through tough times,” Ramírez said.

Moca Co-op, a financial cooperative with more than 16,000 members and $85 million in assets, was among the co-ops back on their feet just days after the storm hit. Moca is a small city in western Puerto Rico with a population of about 40,000. Yerlyn Barreto, the co-op’s CEO, said her first thought after the storm was to reach the cooperative.

“After seeing the devastation, the blocked streets, collapsed bridges, the damage to the residences and the need of the people, I decided to do my best to reach my cooperative,” Barreto said. On her way, she navigated narrow paths clogged with tree branches, downed power lines and debris. When she arrived, some of her employees were already there, beginning to process the disaster. “We decided to share our experience and help our community,” she said.

Their first priority was to open the cooperative and start offering services as soon as possible. That same day, they were able to get two ATMs up and running. After an assessment of the damage and cleanup of the facilities, they decided to open for four hours a day, providing their community with much-needed cash, electricity and financial services.

In the aftermath of Hurricane María, financial cooperatives offered access to cash and other services just 48 hours after the storm, many serving as the sole financial institution for their municipality. Financial cooperatives transformed into community centers, offering electricity, water and food to their members and communities. They were critical to the stability of the island at a moment when banks were closed and there was an unprecedented demand for cash.

The future of financial cooperatives in Puerto Rico

Financial cooperatives are pioneers when it comes to introducing new products and services to Puerto Rico. They have ventured into solar financing and have advocated for laws that allow for the creation of energy cooperatives, sponsoring and financing new cooperative structures across the island. There are many examples. Cooperativa Seguros Multiples, a multilevel insurance cooperative, has led the way, proposing new laws to create energy cooperatives nationwide, promoting a more resilient Puerto Rico. Cooperativa Jesus Obrero is a pioneer in solar financing, an example to other financial cooperatives that want to help their members achieve energy independence and resilience. Cooperativa Sagrada Familia has established a one-of-a-kind alliance called “Viva la Montaña” that coordinates the efforts of local supermarket chains and health services providers, should another hurricane affect Puerto Rico.

At Inclusiv, our mission is to help low- and moderate-income people and communities achieve financial independence through credit unions.

Inclusiv has also collaborated with the Federal Reserve Bank of New York to connect financial cooperatives with Community Reinvestment Act (CRA) investments. In May, we launched Investment Connection for cooperatives and nonprofits in Puerto Rico to present proposals for CRA funding and expand the impact these organization have in their communities. Another area of partnership has been the CDFI Survey. Over 70 financial cooperatives participated in this year’s survey, helping to measure their impact and share it with the mainland U.S. credit union movement.

Pablo DeFilippi is senior vice president of Membership and Network Engagement at Inclusiv. René Vargas Martínez is a program office at Inclusiv. Inclusiv’s mission is to help low- and moderate-income people and communities acheive financial independence through credit unions.

Cooperatives are doubling down on sustainability